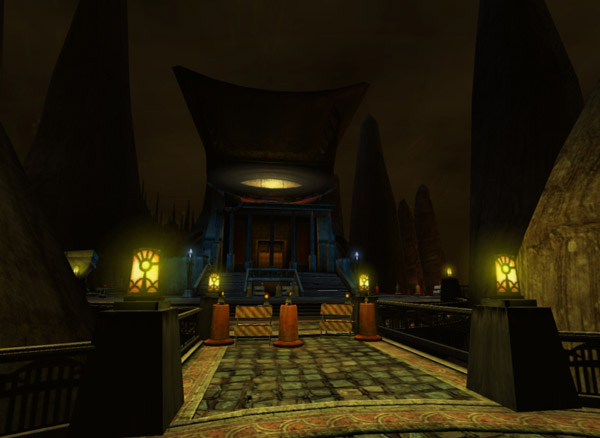 “[L]ooking back at the others about the table, he smiled and raised his goblet. ‘To D’ni!’ he exclaimed. A dozen voices answered him robustly. ‘To D’ni!’”
~ Myst: The Book of Ti’ana, pg. 142

“There’s a couple things that the fans will like. I think the first is the fact that they get to go to D’ni. And anybody who knows our stuff on a little bit deeper level knows that D’ni is someplace you want to go.”
~ Rand Miller, interview from Myst 10th Anniversary DVD Edition

Access to D’ni was undoubtedly one of Uru’s strongest selling points among fans, yet Ages Beyond Myst offered only cursory glimpses of the Cavern: a couple small balconies, a rooftop, and a tiny office. Sure, you could catch a glimpse of Kerath’s Arch (a well-known D’ni landmark), but unless you were one of the lucky few who had access to Uru Live, D’ni seemed to be nearly as far away as ever. It wasn’t until the collapse of the multiplayer edition that the Cavern was opened to all in the form of this first expansion pack, To D’ni. It was made available free of charge, implying that Cyan wanted to extend access to D’ni to as many people as possible. To D’ni may not be the most impressive game in the series, but it finally gave us the trip to D’ni we’d always dreamed of, and for that at least it must be considered a success.

As I illustrated in the two opening quotes, the phrase “to D’ni” has an interesting kind of duality to it: it can be seen either as a dedication or a destination. As a game, To D’ni is about going to D’ni; as a work of art it can be seen as something made in honor of D’ni. Moreso than any other part of the series, this installment is about D’ni itself, and it lives up to its name perfectly.

To D’ni begins with the addition of a single new Linking Book to the player’s bookshelf, one which links to Bevin, a small neighborhood on the outskirts of the Cavern. Within Bevin there is literally nothing to do but wander around, and there’s no real suggestion of how to proceed. The only thing which might plausibly be considered a clue is a notice board which indicates that Teledahn steward Douglas Sharper visited recently. This is, I supposed, meant to suggest that we’re to travel to Sharper’s office, but as a clue it’s not a particularly intuitive one. (I suppose one might argue that there’s nothing inherently wrong with unintuitive clues, but I do suspect that many, many players needed to use a hint guide to proceed past Bevin.) Upon traveling to Sharper’s office we learn the backstory of To D’ni: a DRC member named Phil died in a tragic accident, and as a result the DRC has decided to call it quits. By the time the player arrives in the Cavern, the DRC is gone. Sharper’s journal also foreshadows elements of the next installment (mentioning the phrase “Path of the Shell” for the first time), and provides a clue needed to solve the game’s final puzzle. This first act of the game is a fairly disjointed one, often requiring a walkthrough just to figure out what the objective is, but it’s also the only part which feels something like a story. Phil is one of only a handful of characters who exist in Uru, and while visiting his small spaces doesn’t quite compare to wandering through Gehn’s vast territories, it does convey a sense of personal intimacy while it lasts.

Once the Phil chapter is over we gain access to Ae’gura (D’ni’s capital), and to the Great Zero, a high-tech navigation system used to find coordinates throughout the Cavern. From here onward To D’ni’s gameplay comes into its own, by which I mean it becomes tedious and repetitive. To complete the game, the Great Zero must be activated, and to do so requires the player to wander aimlessly in search of holographic markers. There are no clues as to the locations of markers, so finding them consists simply of stumbling across them, one after another, until you find enough to satisfy the Zero’s quota. The search forces us to wander to every (accessible) corner of the Cavern, but since we wanted to do that anyway, the tedium of the search actually somewhat detracts from the exploration rather than improving it.

This objective notwithstanding, exploring D’ni is worthwhile and interesting. While we don’t visit many places directly related to the novels or known backstory, the sense of D’ni’s overall history is quite strong. The explorable area is fairly large by Uru’s standards, and the illusion of a continuous landscape is pulled off very effectively. D’ni is designed as a highly functional and practical landscape, making it easy to imagine the citizens who once inhabited it. The pride of the D’ni, as well as their predilection for efficiency and skilled workmanship, is evident in all the architecture. The only thing that’s really wanting is a sense of the personal, something to offer a connection to specific individuals who once lived here. This omission is due in part to the fact that we’re unable to access the interiors of most buildings, but even those which are open tend to be cleared out (apparently by the DRC). The small “pub” accessible through a collapsed wall is about as close as the game comes to giving us a true sense of personal life, and it’s a nice moment that I would have liked to see more of. Whether or not one wants to go through the entire Great Zero calibration sequence (and to be honest, little is missed by skipping it), Aegura is one of the most interesting areas included in the Uru trilogy, and is well worth a look.

Perhaps the biggest contribution this game makes to the D’ni lore is in the form of a huge amount of written background material. There are literally dozens of notebooks detailing the exploits of various D’ni kings. There’s a lot of information here, and the level of detail is downright incredible. Many generations of D’ni history are at the player’s fingertips, covering everything from political churnings to the rumblings of war. That said, it’s hard to stay motivated enough to actually read it all. While it’s interesting in its own way (and, to be sure, a very impressive accomplishment), it really is the purest form of backstory: an unvarnished pile of exposition which will come across as forbidding to all but the purest D’ni-history diehard.

Once the Great Zero is finally activated, we can track down the mysterious coordinate from Sharper’s journal, which turns out to represent a weird sort of linking portal in the shape of the Path of the Shell emblem. It’s one of a couple different touches which foreshadow the next installment, and I appreciate that despite To D’ni’s shortcomings, it is at least integrated into the overall story arc. The phrase “Path of the Shell” manages to take on a number of different meanings over the course of the series, and here it refers to the game’s final destination, the Great Shaft (a vast vertical tunnel, somewhat similar in form to a shell, which runs between the Cavern and the surface). There’s not a lot to do or see there. Of immediate interest is a journal left behind by Richard Watson, D’ni historian and real-world Cyan employee, in which he expresses his sadness over the demise of the DRC but looks ahead to the alternative restoration which Yeesha promises. The familiar question of whether D’ni should be restored recurs again here, and again the game answers firmly in the negative. Watson’s reasoning is that a “restored” D’ni would still be just as dead, and therefore it’s better to join in Yeesha’s quest to build a new, living D’ni. The sentiment is understandable, but Watson’s new quest is somewhat too vague to be a very engaging proposition. (Furthermore, from what we’ve seen of Yeesha’s quest so far, it seems to be less about building a new D’ni society than it is about demonizing the old one.) It’s a somewhat odd ending taken by itself; End of Ages follows up on it to some degree, but in its own context it feels somewhat empty. Its strangeness is compounded slightly further by the fact that the game’s final objective is simply to jump into the Great Shaft (and link away at the last second, the same as if you’d fallen by accident). This ending does provide a sort of closure, but like most aspects of To D’ni, it does so in a somewhat awkward and contrived manner.

To D’ni was, by and large, thrown together to allow offline players (that is, everyone) access to the formerly-restricted D’ni environment, and both the sentiment and the breadth of it are deeply appreciated. What it lacks in story it makes up for in atmosphere, and its only grievous shortcoming is its tacked-on objective. The players asked to explore D’ni, and that’s exactly what To D’ni delivers: nothing more, nothing less. It was an opportunity that sadly did not come again.

« Back to Myst in Retrospect